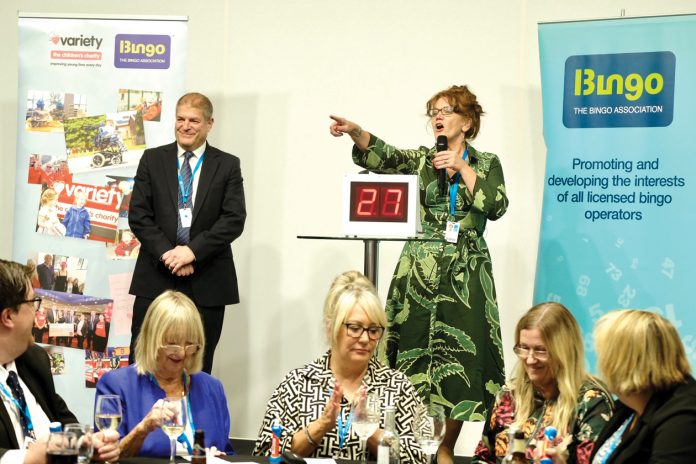 It’s nice to meet you – at last!
This was the first occasion for some time that attendees were able to meet face to face, with politicians joining meetings, think tanks and discussion groups around the latest thinking. I was finally able to meet the chair of the All Party Parliamentary Group (APPG) for Bingo Alex Norris MP in the flesh, after having only previously met on Zoom meetings.

Attending the Labour Party Conference afforded the opportunity to meet several other key opposition MP’s such as Alex Sobel MP (Shadow Minister of State for Tourism and Heritage) and some regular conference favourites such as Carolyn Harris MP, (Chair of the APPG for Gambling Related Harm). The Rank Group hosted a great evening event at their Casino on Brighton seafront which was attended by up to 10 MPs at various points throughout the evening. Thanks go to David Williams at Rank for hosting this event.

A Bingo Party
As you would expect, given they are in Government, the Conservative Party Conference is a different affair. With the 2005 Gambling Act Review in full swing there were events held and supported by both pro and anti-gambling pressure groups. The ironic point of interest here is that both groups want the same thing; a safe and well regulated industry. The differences between the two groups are around what this actually looks like. One problem for what I call the ‘anti-gambling lobby’ is where they continue to brand every activity as ‘gambling‘ when their real focus is digital. Under scrutiny they do concede that land-based premises are the more acceptable form of gambling, however Bingo did not escape some criticism with regard to B3 Gaming machines and Electronic Gaming Tablets, particularly from some of the academics and researchers present. A little knowledge can be a dangerous thing!

In the evening, courtesy of our PR and Lobbying Agency PLMR, The Bingo Association held its second Conference Bingo Session on Monday evening during which three games of bingo were to be played, with winners donating the prize money of £50 for a line and £250 for a full house to a charity of their choice.

What a line-up of celebrity caller! Firstly ‘red wall‘ MP Gil Mortimer started the ball rolling to a packed room with standing room only. She was followed by head of the Scottish Conservatives Douglas Ross who received an amazing ovation. The third caller was John Whittingdale MP – until recently the Minister in DCMS – with the gambling brief and the 2005 review as part of that brief.

By popular demand the three games of bingo extended to five games, with Wrexham MP Sarah Atherton (who came with colleagues socially) offering to call a game and then the former Mayor of Southampton Linda Norris – another social guest – offering to call the final game. What a night, and there is no better way to spread the reputation of the game of Bingo and The Bingo Association than by actually demonstrating what fun it can be!

Can’t wait for the next one already.