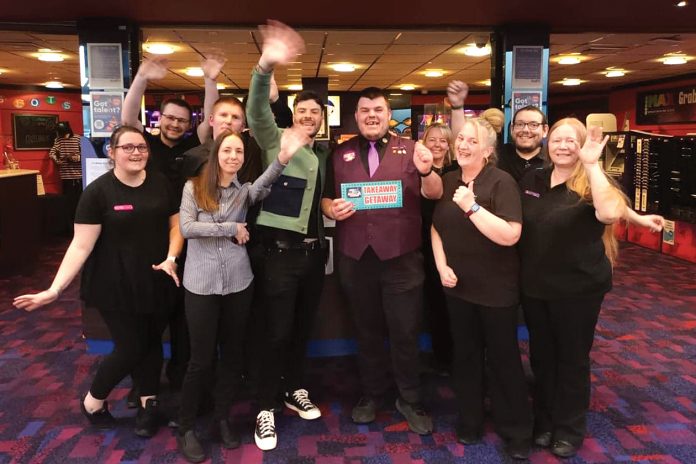 For the series finale of the national entertainment programme, presenter Jordan North burst through Mecca Wrexham’s main doors, armed with a plane ticket for a once-in-a-lifetime holiday for bingo caller, Jason Davies.

The big reveal was part of the fan-favourite ‘Gift on a Shift’ segment, which scouts out hard-working individuals who deserve something extra special. Surprising the players in the club mid-game, Jordan and his camera crew burst in with a megaphone to present Jason with a holiday. Jason was truly shocked, stepping down from the podium full of smiles to receive his well-deserved prize: a ‘Takeaway Getaway’ plane ticket for a one-week trip to his dream destination.

“What an incredible moment and a huge shock!” Jason said. “When Jordan appeared with the megaphone I didn’t know what was going on. At first I thought one of our players was getting extra lucky, but then I realised that it was me he was after and that I was live on telly! I can’t wait to get my shades and flip-flops out for my Takeaway Getaway – now I’ve just got to decide where to go!”

After the big event, Jason was the star of the night, posing for pictures with his family, friends and Mecca Wrexham colleagues, plus Jordan himself. As one of the club’s well-loved callers, Jason is widely regarded by staff and guests alike as the face of the venue, known for proudly showing off his collection of commemorative Mecca pins he’s gathered over his 5 1/2 years at Mecca.

Prior to making the surprise presentation, producers had been liaising with Mecca Bingo to ensure that Jason would be on shift and that Jordan and the crew were able to hide until the big reveal.