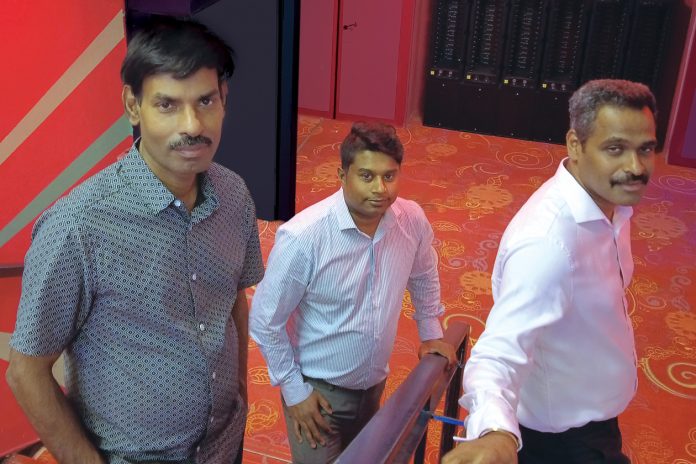 Bingo clubs are always at the heart of their community, bringing people together: there’s a reason why the phrase ‘bingo buddies’ rings so true, but when a club closes the loss is so much more than just not playing bingo.

For those new to bingo, both team members and customers, the community bonds and friendships of bingo can be a revelation, something that hit home with Apple Bingo founders Arifur Rahman, Malar Kannan and Kandiah Thampinathan (Nathan).

Each of the founders of Sydenham’s newest community venue, Apple Bingo, found their way to bingo from quite unrelated career paths and, as with so many, loved what they found and the opportunity to connect with people.

“We each came from different or non-bingo backgrounds,” said Arifur, “Nathan has a degree in accounting and finance, Malar studied engineering and has an MBA, and I have a Masters in accounting. None of which you would have thought might have lead you to bingo.

“But we all found bingo and met each other while working for Mecca. I had been working for American Express and was looking for a new post and direction in 2011 and applied to Mecca Bingo to work at their Catford club. It was a revelation!

“I loved the environment and people, as it felt such a happy place. I had never really thought of bingo as a career before, but it just felt right.”

It was while working at Catford for GM Kim Jones that Arifur met Malar and Nathan, who both felt the same way about bingo too. Malar had worked in bingo for 12 years and Nathan 18 years. Kim said, “They each have great natural energy and working with them was fantastic. They were always focused on customers’ needs and their enthusiasm was infectious and genuine.”

When Mecca Catford closed in 2018 Arifur, Malar and Nathan missed the club, bingo and the customers. “We had worked over 10 years at the club,” Nathan said, “our bingo customers are like our family. When the club closed, we felt we had lost family.”

While working at Catford the trio had got to know the local competition very well: Buzz in Eltham, Surrey Quays and Tooting, and at that time, The Palaces at Elephant and Castle. All three had played in all the clubs and watched what worked and what didn’t in terms of promotion and customer interaction: all three are unanimous in siting Patrick Duffy as a huge inspiration and influence on their club, observing on many occasions Patrick’s interaction with customers and solving any issues on the spot. They also paid close attention to policy: more money on the board, means more customers and more customers means more money on the board.

They each had choice, to continue to work for someone else or, to combine their considerable expertise and experience and set up their own club: they knew the market and that there was space for a new club, and missed their customers, they just needed to find the right venue. Malar commented, “The market is very local but covers a surprisingly broad area, from Hither Green, and Catford, through New Cross and even over as far as Elephant and Castle. Bingo clubs need space, so despite the size of the area we were
looking in there were no obvious options.”

Living locally as all three co-founders do, they were constantly on the lookout for options that would offer the space needed and in locations where the local authority would be likely to grant the necessary licenses.

Zanzibar nightclub in Sydenham closed in 2015 following revocation of its license due to a string of complaints regarding mismanagement and problems with patrons, since which time it had been vacant. The old nightclub offered the right square footage and was in a central location, conveniently opposite Sydenham Bus Station, a hub for south east London buses. While there was no car park this was unlikely to be an issue for most customers in the area as they used public transport, in addition to which this would also make the lease more viable.

It seemed like a great venue in an ideal location, but the issue of change of use and licenses still needed to be explored, at least in principle, before progressing further. Meetings with the local police and council revealed that not only were they open to the proposal, but would actively welcome it. While bingo players might be a bit testy when there is talking during main stage or a false call, they are, as a rule, not prone to heavy alcohol consumption and unruly behaviour, which pleased the police, and the council were eager to see the large venue brought back to community use.

The trio made their move, arranging finance for their club through personal savings, mortgages and loans in order to make it happen, opening their doors in August 2020. As the world was in the midst of the COVID pandemic, opening a new leisure venue may have been viewed by some as extremely risky, but one year and a second national lockdown later the trio are triumphant. The Catford club was doing 1,200 admissions a week, Apple Bingo Sydenham is already doing 1,500, and rising, in addition to which Arifur, Malar and Nathan have been able to reconnect with their bingo family, staff and customers.

What gave them the courage to proceed and the confidence that they would be a success? We asked Arifur.

“Our collective time working in bingo has given us a lot of experience, of customers, managing clubs and the local south east London bingo market, as well as having the opportunity to work with and learn from some truly inspirational people in the sector – like Mark Brenton AM at Mecca, Kim Jones GM Mecca (unbeatable at customer service) Jane Hudson (beautiful mind) and Adam Conningham and Anver Murad at Buzz.

“This made us sure that if we could find a venue and physically create the right space, then we would be able to deliver the right customer experience – with Malar front of house and book sales, Nathan back of house and catering, me main stage and our brilliant host Michael Farley. We had great support from bingo industry suppliers including Tony Lister from Cowells Arrow, Jodie Biglin at ECM, Steve Clark from Leisure Technique, Chris Wrigley from ISD for Maxim, Ralph Taylor from UK Gaming and Alastair Stewart at the National Bingo Game, which we want to be able to offer in club as soon as we opened.

“Our club is all about us: me, Malar, Nathan and Michael. Our golden rule is the customer is always right. All our members know it’s their club, every single one of them is like a family member – we know them, we talk to them, we try to understand what they want and resolve any issues they may have then and there. This is something you can’t do in a large chain.

What makes it a success? This extraordinary group of people, you can’t find the same group anywhere else and this is our success formula – with Nathan handling the back office all is in his steady control and Michael Farley a great show host, but if it was not for Malar and the sacrifices made by his wife Seema, Nathan’s wife Suthakalyani and my wife Sadia who have been involved from the start, there would be no Apple Bingo.”