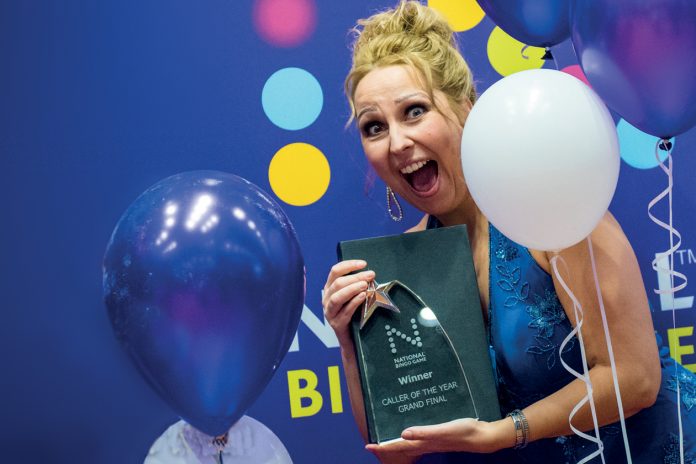 The search is on, for the National Bingo Game’s Caller Of The Year 2022 and for current reigning champion Donna Kunyo to pass on the crown.

A main stage bingo caller is the heartbeat of every club; the one who takes centre-stage and breathes fun and excitement into every single session. Their professionalism is essential to the management and hosting a game, while their presence and ability to entertain and command a room is what can turn a good game, into a great game.

The National Caller of the Year competition first took place in 1994 and continued for around 15 years before being re-born in 2019, when 50 callers from over 20 operators entered. Following a variety of regional heats and events, six finalists made it through to the Grand Final, with representatives from Buzz, Castle, Carlton, Club 3000, Beacon (now Merkur) and Mecca.

Despite it being a competition and the fact that there can only be one winner, contestants really enjoy the experience of taking part and find genuine support from each other.

The biennial competition was due to take place in 2021, but as with so many things fell foul of the pandemic. Caller Of The Year is the perfect showcase for all that is good in the bingo community – the team, the players, the game of bingo and above all else, fun.

This year’s competition will be held in three streams:

Callers from Independent clubs will compete in four regional finals to be held on, 29th May, 12th June, 26th June and 10th July. Venues will be announced on the National Bingo Game website and Facebook and Twitter pages. Buzz and Mecca streams will be starting shortly, with each stream putting forward contestants for the Grand Final, to be held at Club 3000, Wigan on 13th November 2022.

How COVID-19 has impacted LBOs