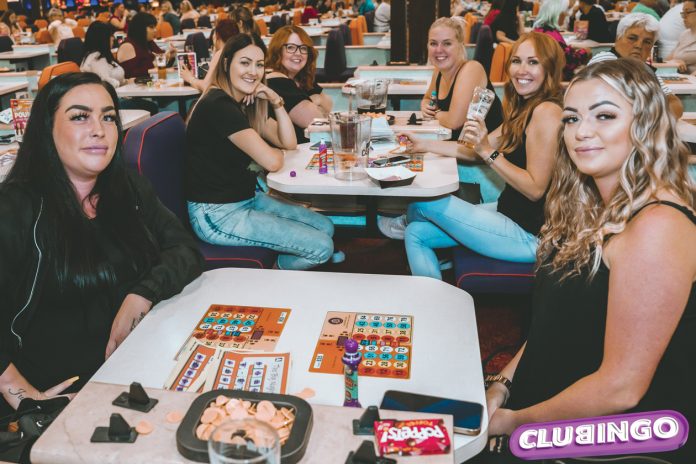 Launched in July 2021, Clubingo™ is the new entertainment brand created by the team at Majestic Bingo and promises to deliver live music events, crazy bingo nights, comedy clubs as well as showcasing top DJ’s and artists.

Speaking about the new brand, Stuart Booth, Head of Events, said “We’re delighted with our creation, and believe the Clubingo™ brand will be a huge success. We premiered it on the 31st July at our Mansfield and Barrow in Furness Clubs with the ‘Big Night Out’ which included tribute acts, a new live hosted crazy fun hour of bingo games with a twist, and then a chance to get down as some classic tunes were played for an hour of dance.

“With a late night finish for everyone to grab a few drinks from the bar, it also gave everyone a chance to grab a cheeky shot from our mobile bartender walking the floor! Whilst this is a totally different concept for these two Clubs, we’re still a bingo club at heart, so the bingo session itself ran as usual until 9pm when we switched to presenting Clubingo™.”

On the launch night, Clubingo™ also announced to the crowd its first headline act of Ultrabeat featuring Ian Redman (Famous for ‘Pretty Green Eyes’), that will run in Barrow on 16th October and Mansfield on 23rd October, coupled with brand new bingo show ‘No Limits Bingo’, – think Clubland meets Bingo and you’ll get the idea. December will also sees 5ive, one of the biggest 90s boybands, perform live at the two locations. Stuart also told Bingo Connect that the two locations were just the start and they will soon move into other Majestic Clubs across England and Wales, as they scale up their delivery of quality led events that have something for everyone. Mark Jepp, Managing Director, Majestic Bingo said, “I jumped at the chance to progress the Clubingo™ brand when we were looking at ways to diversify and promote bingo as a fun night out with great bingo running through its DNA.

“The towns of Mansfield and Barrow are crying out for a quality entertainment venue with live acts, and it’s a great opportunity for people to have some much needed fun. We want bingo to appeal to everyone, and believe our new brand, which is an integral part of the Majestic Bingo Family, will run in harmony with our traditional bingo sessions and encourage new customers to give bingo (albeit with a difference) a try.

“We’re not here to compete with others that are running bingo raves or similar: Clubingo™ simply puts Majestic’s own unique spin on the world of bingo with a bit of attitude. I particularly liked seeing the two customers who won the Slush Puppy Machine both twerking like mad so the crowd could decide who was worthy of the coveted prize!”

The Clubingo™ website is live with details of a number of other events planned at both Mansfield and Barrow in Furness on the last Saturday of each month.