Home In Profile From bakery to bingo 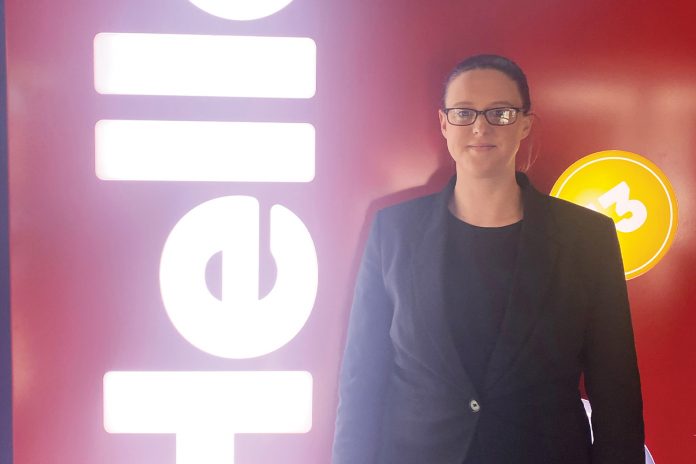 Bingo players and communities are one of the best advertisements for club bingo and for many players the route through which they discovered the game. It seems as though staff may have a similar pulling power and this is certainly the case for Stacey Mollart, who credits her grandma with giving her the ‘bingo bug’.

Stacey was born and went to school in Horbury, near Wakefield, where she still lives, with partner Shannon and seven year old daughter Evie, surrounded by her extended family. One of Stacey’s more vivid memories from her childhood is that of taking her grandma to bingo, “From as early as the age Evie is now, I can remember dropping off and picking up my grandma from bingo, which I still occasionally do!” Stacey said.

While still at college Stacey got her first job, part-time, at a local bakery, which she realised was not something she wanted to do full-time. While she enjoyed serving customers she felt she wanted something more.

Stacey’s grandma is not just a regular bingo player, she also worked at bingo at that time and suggested that Stacey think about applying for a job, which she did. Initially part-time and then full-time.

“My grandma worked in Bingo for forty years: twenty years for Riva and twenty years for Gala, now Buzz. I first worked part-time at the Wakefield club, while still at college, working on the bar and club floor. Once I had finished college I took up a full-time role, just as my grandma was retiring, from working at bingo that is. She still plays three times a week!

“When I started it was just a job, but within a year I was hooked. I loved coming to work every day and being part of the club community, which is as much about staff as it is customers. It’s my bingo family. I think it’s fair to say that my grandma gave me the bingo bug, as we both love people and being part of it, but I only play bingo occasionally. I think that’s due more to lack of time. Between working at the club and Evie and family, right now I have so little spare time.”

“I started in bingo in Wakefield, but left the club in 2010 to take up the role of Operations Manager at the Tong Street club in Bradford for a few months, before then going on secondment in 2011 as an Operational Support Implementation Manager. This saw me travelling up and down the country training and supporting teams with the latest Touchpads at the time. I really enjoyed the experience but missed the club life and a ‘bingo family’.

“I was asked to support Andrew Whitworth in the then recently purchased Bradford City Club and went in as an Operations Manager. I don’t think I was meant to stay as I was only supporting Andrew in the club, but we worked really well together at the club and I ended up staying for 6 years!

“The Bradford City Club was the biggest club I had ever worked in and I was still there when Gala rebranded to become Buzz and what a buzz it was. The atmosphere was electric on our first day as Buzz Bingo! It was challenging but exciting and I’ll never forget it.”

Having jumped into a career in bingo, Stacey found something that not only did she love doing but also that she was successful at and which offered new challenges and scope for progression.

“After Bradford in 2018 I moved to the Wakefield club as Deputy Manager, back to where I’d first started in bingo! I wasn’t there long before I moved to the Castleford club as Temporarily In Charge (TIC) General Manager (GM). It’s only thirty minutes drive from Horbury, so an easy commute.

“Having moved to the Park Road club in 2019 as TIC GM, Castleford then became my first club as General Manager. In my first year of being GM I faced more challenges than I could have possibly imagined, but ended up loving my job and bingo even more as a result of it all.

“Like everyone else we faced Covid and went through not one but two lockdowns. It was hard on everyone. Like so many clubs we had quite a lot of customers for who bingo is their main social activity, and they rely on it for company and community. The club team helped work a telephone rota, checking in on customers and seeing if they needed anything: we did quite a few shopping trips in the first lockdown. We also used our club Facebook account to post staff video messages and quiz questions, which encouraged customers to respond to, which helped keep everyone’s spirits up. As a club team we made use of Zoom, to make sure we were all keeping up with each other and planning how we could support our customers. It was hard, but it brought people together, making a stronger community, even though we could not meet in person, or open the club for customers.”

Re-opening and building customer understanding of and confidence in safety was a sector challenge, as every club was navigating something completely new. Like many clubs Stacey and team wanted to show customers what had been put in place to help manage risk and videos become key to achieving this. Thankfully Club Operations Manager Sara Fulcher is a dab-hand with her trusty mobile phone, as Stacey, by her own admission, is a bit pants when it comes to working a video camera on a mobile!

National lockdowns proved a trying time for everyone, particularly more vulnerable people, and even though bingo clubs were not able to open and bring people together, bingo communities across the UK found a way to connect, support and help: not only emotionally but also physically. The post lockdown ‘bingo family’ at Castleford was also key to the next challenge Stacey and team were to face, club closure and relocation.

“Unfortunately, the Park Road club closed its doors forever on 2nd October 2021. Over six hundred people came to see us for a final session and say goodbye to the end of an era, twenty-five years after the doors first opened.

“Castleford was not losing bingo though, as a new club had been created. However, we were asking customers to transfer from a large destination venue, with lots of car parking, to a much smaller high street venue.

“Myself and the team worked tremendously hard with support from our Regional Director Clive Newton and Regional Manager Paul Farrelly, to transfer our destination customers to a high street club. It was a tough sell, but we did it and with fantastic results that saw 80% of customers from Park Road join us at Albion Street.

“The hard work was key to the success, but not just the work that went into the information and follow-up immediately prior to the move, but the work that had taken place across the previous eighteen months that had built such strong relationships between customers, between staff and customers and between staff.”

Now settled in Albion Street, Stacey is happy with the short commute to work, which also allows her to make the most of time away from bingo, when she loves to go hiking with Shannon and Evie. An avid reader and eater, she assures us that the love of hiking is not driven by the love of eating: being based in Yorkshire, surrounded by so much beautiful countryside, is therefore an added bonus.

The new ‘bingo family’ of staff and customers at the Castleford club remind Stacey of why she loves working in bingo so much: having had the opportunity to try a number of roles in bingo, which in 2010 saw her take a trip to London to have her voice recorded for auto caller, she knows that being in-club is what excites her the most.

“I think if you like people, then bingo might just be for you, either as something to do, or somewhere to work, or even both. It gives you something different every day: there is no such thing as a dull day at bingo, whichever side of the book sales desk you are on!”