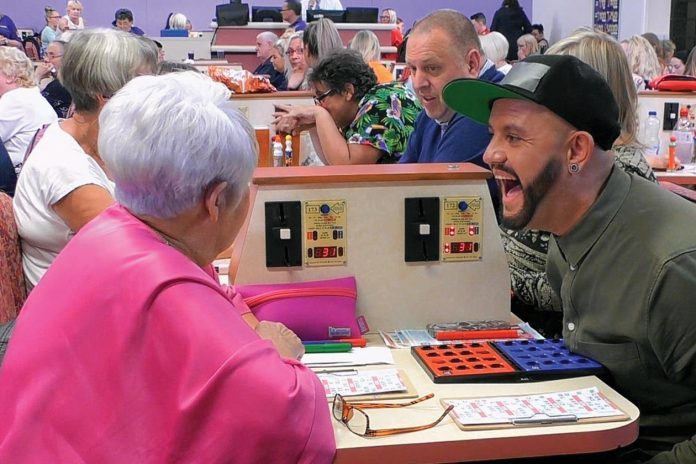 Full House is a phrase as synonymous with bingo as ‘eyes down’, both of which have now given rise to television programmes – two fictional, one fact. Eyes Down (2000), some may remember, was an episode of the ‘That Peter Kay Thing’, with a myriad of fascinating characters, many played by Kay himself, set in the fictional Apollo Bingo Hall. Eyes Down (2003-4) was also a comedy, but a series, set in a bingo hall and told of the adventures of the staff who worked there. Starring Paul O’Grady as the unflappable and sarcastic manager, Ray Temple, this was not O’Grady’s first brush with bingo. His alter ego Lily Savage had done turns at calling and also promoted the National Bingo Game in 1999.

Full House, by production company Tuesdays Child for the BBC, is the first reality television program to be shot at and around a bingo club: Majestic Bingo, at Judge’s Hall, Tonypandy in South Wales, to be exact.

The production company had been looking for a bingo operator who would agree to work with them, when they approached Majestic Bingo’s Managing Director Mark Jepp. “They approached us and we said yes, as we are advocates for bingo and the game and felt it would be a good showcase for the industry” Mark said.

“After researching the production company that planned to develop the concept, and their rich history of working on credible programming for mainstream TV channels, we agreed to progress. This was on the understanding that the programme would not criticise the bingo product or ridicule the customers, but create heart-warming TV that would make people smile, by working with our local Welsh community club in Tony Pandy, who themselves had real life stories to tell.”

The programme was conceived by producer Jacci Parry, whose television credits include First Dates and the Undateables. There is the possibility that this one-off programme may become a series. Jacci, like so many, first played bingo with her Granny and members of her family while on holidays in Southport and feels strongly that as well as providing a safe space for men and women of all ages, bingo also serves a greater purpose: social interaction and the creation and sustaining of communities – bingo is a social hub and that is what Full House has aimed to capture. While filmed in Wales, as we know, the story of bingo communities is universal.

As described by the production company, Full House tells the story of a special bingo club and the valleys community it calls home. Known as the ‘Las Vegas of the Valleys’, Judges Bingo Hall (Majestic Bingo) in Tonypandy has been entertaining the crowds and calling out winners for the last 130 years. The hall was opened by Queen Victoria’s daughter Princess Louise and the Duke of Argyll under the original name of the Judge Williams Memorial Hall – as a commemoration to the late Judge Gwilym Williams. Since then it has held dances, snooker tournaments, concerts and hosted boxing events.

The programme focuses on celebrations for their milestone anniversary with a one off £30,000 prize, the hall was rigged with cameras to record the night and shine a light on the lives of the club’s dedicated clientele of bingo players.

Filmed last year, Full House offers a window into the lives of this close-knit community, where playing bingo offers more than the possibility of a big win. While all are hoping to hit the jackpot, for most, the club is a home from home where old friends meet up and families have a safe space to thrash out their problems to a background of bingo calling.

As the night unfolds, a host of dramas play out, as all the while, the clock ticks down to the big prize of the night and a life changing sum for someone in the club. Featuring in the programme are:

The programme aired on 19th August and the response to it has been great: a piece of television that makes you smile and think a bit. It was the third most watched programme in August and also created really great engagement on social media. Figures for downloads and viewing on BBC iPlayer are yet to be revealed, but all looks good.

Full House is available to watch on BBC iPlayer until April 2021.

Tick all the boxes when it comes to age checks