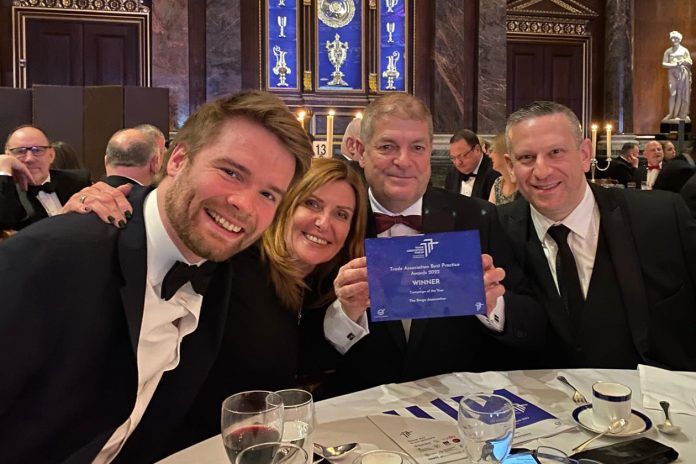 Since its formation in 1997, the Trade Association Forum has been encouraging the development and sharing of best practice among UK trade associations and promoting their role to government, industry and the wider public.

The Awards, now in their nineteenth year, were supported by the Department of Business, Energy and Industrial Strategy, with the ceremony held at Drapers Hall, one of the City of London’s Livery companies.

The Bingo Association were nominated in the category of Campaign of The Year for its ‘Save Scottish Bingo’campaign, focussed on the plight of Scottish Bingo clubs, that were operating under greater restrictions than elsewhere in the UK, after a period of forced closure due to the pandemic. Without support clubs would face closure, putting thousands of jobs at risk. Scottish Government were asked to provide financial support to prevent club closures, preserving community and jobs, through asking bingo players to say what bingo means to them.

There to receive the Award at the Ceremony was The Bingo Association Chief Executive, Miles Baron, who commented, “The BA are delighted to win the Award for Campaign of The Year and support TAF. It was great to meet so many similar organisations as ourselves doing a great job for their members under difficult circumstances, all under one roof. Thank you again TAF for this great opportunity.”

Emily Wallace, Interim Chief Executive, at the Trade Association Forum, said: “The judges were very impressed by the real-world impact of the campaign, notably the release of £2.3m of direct Government funding that helped 47 businesses survive the impact of lockdown as well as securing an earlier reopening date for bingo clubs.

“Given the lack of pre-existing relationships in the Scottish Government, the judges praised this as a remarkable result and particularly liked the use of consumer voices in the campaign to bring it to life.”

For more information on the TAF Awards visit: www.taforum.org/awards