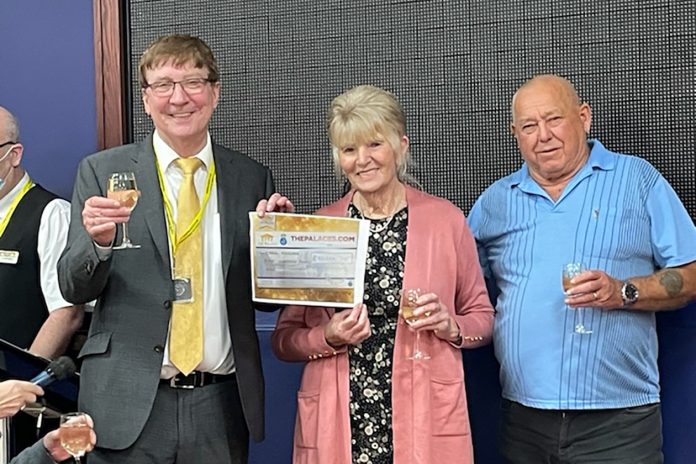 The work of the club team enabled a full press release to be drafted and shared with local print and broadcast media: within thirty minutes of the release being sent out two local papers were on the phone, shortly followed by a team from Radio Suffolk.

Mother of four, grandmother of fifteen and great grandmother of ten, Carol Fulcher, 75, was  playing the National Bingo Game at The Palace club with her husband of 55 years Joe, as they had done on many previous occasions, when Carol found herself calling ‘house’ on the top Jackpot prize of £50,000!

Carol said of her win, “It was unbelievable. I was in a state of shock: simply gobsmacked!”

Carol was introduced to bingo by husband Joe, when she went with him to meet her then future mother in-law at bingo. Joe thought that introducing Carol to his mum over a game of bingo was a sure fire winner, and he was right. Having retired in 1990 bingo is something that Carol and Joe enjoy doing together and it brings back good memories of Joe’s mum too.

“We like going to bingo – it’s nice to get out of the house, a lovely way to make friends and it’s clean and safe. Also, we are well looked after at The Palace by the staff there: we know lots of the regulars and the food is good too.” Carol commented.

The Palace club team wanted to mark the big win for everyone and held a special celebration for Carol on Tuesday 28th September, capturing pictures of the lucky winner on the day that she was happy for them to share.

Patrick Duffy, Managing Director of The Palaces said, “We love seeing people win and are delighted that Carol has won such huge cash prize on the National Bingo Game – I am sure there will be treats in store for the family. It was a pleasure to see everyone at the club joining in Tuesday’s celebration: we love to celebrate!”

The National Bingo Game (NBG) provides PR/media support for all £50,000 jackpot winners, working with club teams to create a media release and secure all important local press coverage, which is then also shared on NBG Facebook and Twitter.

Inside the bingo hall at the heart of the Rhondda