Home News General News The rise of drive in bingo 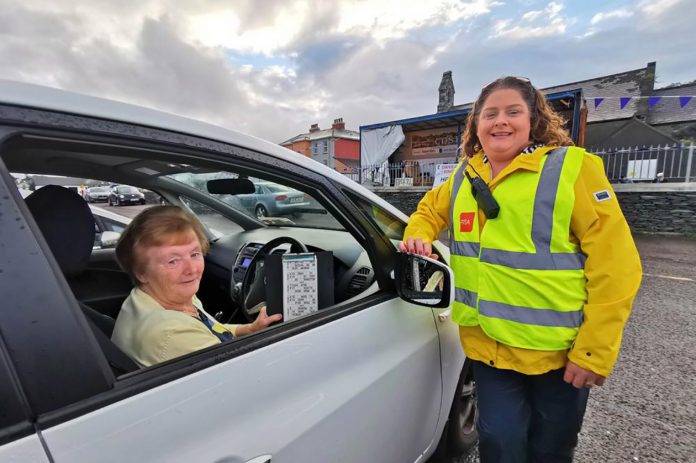 Bingo is getting a reboot. The stalwart of community centres and halls is coming to a drive-in near you this summer, spurred on by the Covid-19 crisis.

Nostalgia is strong this year – drive-in movies, reminiscent of a bygone era, are all the rage. But the drive-in phenomenon, with the safe space afforded by sitting in your car, is also taking the bingo scene to a new level. It may even be inspiring a new generation of bingo lovers.

At 7.45pm every Friday evening for the past month, cars make their way to the pier in the bustling fishing town of Castletownbere in the heart of the Beara Peninsula.

They park up, tune their radios into a channel where the bingo is broadcast and keep their eyes on the prize. Sandra O’Shea, a member of the town’s development association, says they got the idea for drive-in bingo when they were trying to brainstorm some ideas to get the older people, who had been cocooning, back out and about again.

Last year, as part of the town’s festival of the sea, Castletownbere Development Association (CDA) organised a drive-in movie event. And organisers felt bingo could be a big draw for cocooners missing their usual get-together with friends.

“Our feedback was that a lot of people were lonely and missing social interaction,” says Sandra. “We had our first bingo on the pier on June 26. We have a container set up with all the equipment on it and we broadcast it on Beara FM, so people can tune in on their car radios. Our first one was in torrential rain and we had 36 cars – it’s been a huge success.

“There’s three of us with walkie-talkies that go around and read and check numbers, paying attention to social distancing and hygiene. The reaction has been amazing and it makes my heart feel good to see it. The older people are so happy to have an outlet once again. They’ve been travelling from as far as Skibbereen, Bantry and Ballydehob to get here. We’ve decided to run it every Friday till the end of August. In our second week, we had 58 cars,” she says.

But what organisers didn’t figure on was how popular it would be among all generations. “We had a 13-year-old girl out celebrating her birthday with her family and a car load of teenagers with their family. It’s brought young and old out. You could say it’s given bingo a shot in the arm. My own girls, Ava (15), Eimear (13) and Abbey (10), love the bingo,” says Sandra.

As well as bringing people out, the drive-in bingo has been an unexpectedly successful money spinner for the CDA. In the past number of weeks, they’ve raised over €3,000 to do up an old church in the town, which the CDA recently acquired.

At her home in the town, Paschal Hurley (74) says Friday nights have become the best night of the week since the drive-in bingo started. While her husband Danny isn’t a man for the bingo, Paschal says she collects her best friend Monica Lynch in her car and the two drive to the pier.

“I found lockdown very hard. I couldn’t see my children or my grandchildren, or even my great-grandchildren. I always loved going to bingo and I couldn’t even do that anymore. It was that place you’d go to meet up with your friends and have a cup of tea. It was one of the things I missed most,” says Paschal, a mother of six, grandmother of 12 and great-grandmother to four.

“The drive-in is the greatest thing ever. The CDA has been outstanding – they’re always trying to do different things for the town. I’ve been driving down to pick up my friend Monica. We’re always there on time. I won the jackpot of €240 years ago, but I don’t go to win – it’s just nice to get out and I really look forward to it. It was terrible to be stuck indoors day and night. When Friday night comes, it’s the greatest thing. I dress up and have my hair done,” says Paschal.

At the other end of the country, May and Francie McFadden, from Ramelton in Co Donegal, take a spin to Ray Community Centre near Rathmullan every Thursday evening where drive-in bingo is held in the centre’s car park.

May (77) says she and Francie (83) have been long-time bingo fans, but lockdown put an end to it and they missed seeing their friends. “There was a time I’d go five nights a week, but more recently, it was a Thursday and a Sunday night. When we used to go to bingo at the Milford Inn, there would be 10 of us at a table. We were always there and nobody else would dare sit at our table,” says May.

She says she and Francie were very vigilant about cocooning as Francie became gravely ill last year after contracting septicaemia. While he recovered, they’re still cautious about large social gatherings, which is why the drive-in bingo, where you’re protected in the bubble of your own car, is perfect. It allows them to be out and about, but safely, apart from others.

“I’d be a bit cautious after Francie was very ill. With prayer and care, he recovered, but I have to think of him and very seldom would we be out,” says May.

“We get the bingo on the wireless in the car and everyone keeps to the regulations. The whole idea is sharing the experience. When you look out both sides of the car, there are people who might be at the bingo with you and you can have a bit of a chat until they start calling the numbers,” says May.

“Whoever came up with the drive-in is absolutely great. If you win, well and good. If you don’t win, you’re out and you’ve met up with people,” she says.

Marie Gordon, PRO of Ray Community Centre, says the feedback has been great and everyone loves it because they feel safe. 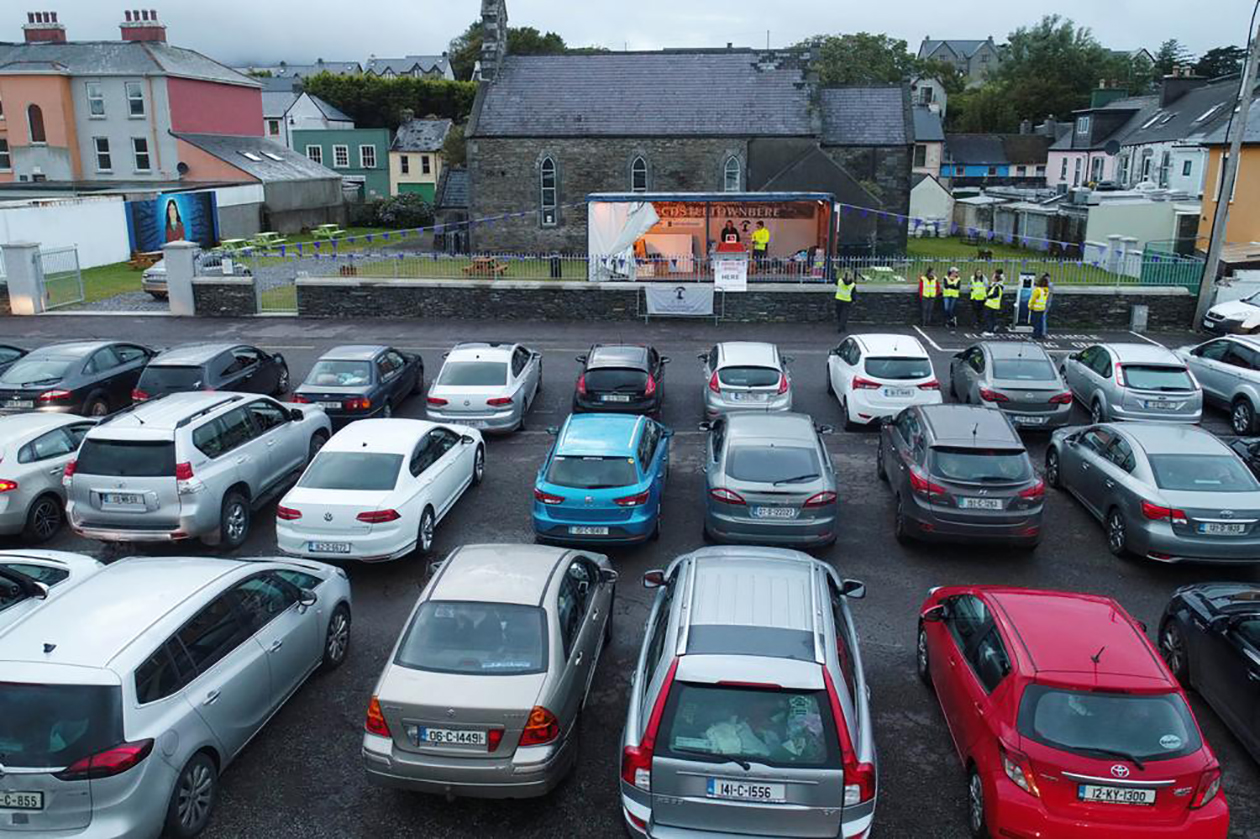 “We’ve a huge car park at the side of the building and people can tune in to a local radio frequency for an hour and they can hear the bingo on their car radio. We still have the speakers as well. We’ll keep it going as long as there’s a demand and we’re not losing money. People are already asking us what they’ll do in the dark nights – they really want this,” says Marie.

According to Let’s Play Bingo CEO John Martin, bingo is a pastime that’s central to so many in society and now that restrictions are easing, he believes it’s important to get halls and club bingos safely open again.

“No more than buying drink in the local supermarket versus going to the pub to enjoy the atmosphere, people will want to return to what they know and like,” says the bingo boss.

GAA clubs such as Termon in Donegal have also been getting to grips with drive-in bingo, running a night at the local community centre every Friday for the past month. It’s not unusual to see 80 or 90 cars parked up outside on a typical Friday night. Club chairman Brian Trearty says, with the restrictions on indoor events, this seemed like the perfect way to fundraise.

“Like all clubs, our income has taken a hit. We still have insurance and levies and there’s no rebate. We had the idea of trying to keep the fundraising going by running bingo. It’s been going for the last four weeks now,” he says.

Selling bingo books for €10 or double books for €15 mean the club gets some much-needed cash. “We’re raising small funds – we’ll not make millions out of it, but people are happy to get out,” says Brian.

Club 3000 opens its doors in Wigan