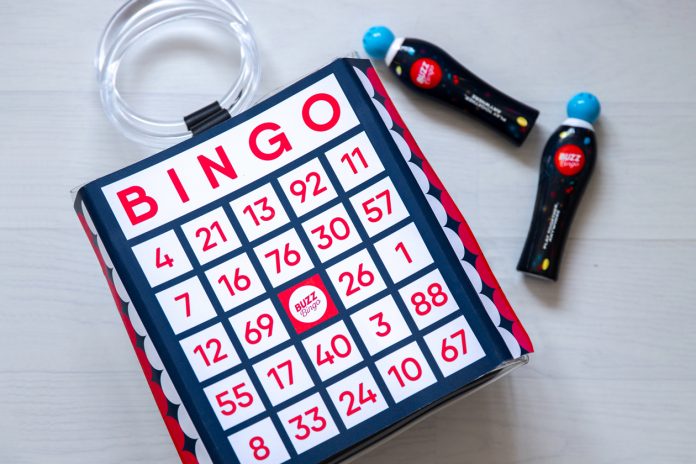 The Lulu Guinness company was founded in 1989, when its then 29 year creative director and founder created her first women’s briefcase. The brand’s creations are regularly seen on the arms of trailblazing women, such as Kate Moss, Fearne Cotton, Emma Watson, Poppy Delevigne, Paloma Faith, Dita Von Teese and Bella Hadid. All women with a fierce sense of humour and an even fiercer sense of their own femininity and style, so it’s no wonder it spoke to bingo players.

Buzz Bingo decided to create its own version of the famous bag, the Buzz Bingo Bag. Retailing for a fraction of the price at £1.75, it’s no surprise that it sold out too! The team  feel flattered that the designer had chosen a bingo card as inspiration for their accessory launch.

With the well-known celebrity supermodel Bell Hadid spotted with a Bibi bag in Milan earlier this year, the British designer decided to release a further very limited number of bags for sale which sold out within 24 hours.

The Buzz Bingo Bibi-inspired bag saw sale proceeds go to the NHS, which Buzz Bingo has also been supporting through the introduction of NHS Lucky Stars in its Main Event games – a feature that sees 5p from the sale of every paper book and electronic touchpad package donated to the NHS.