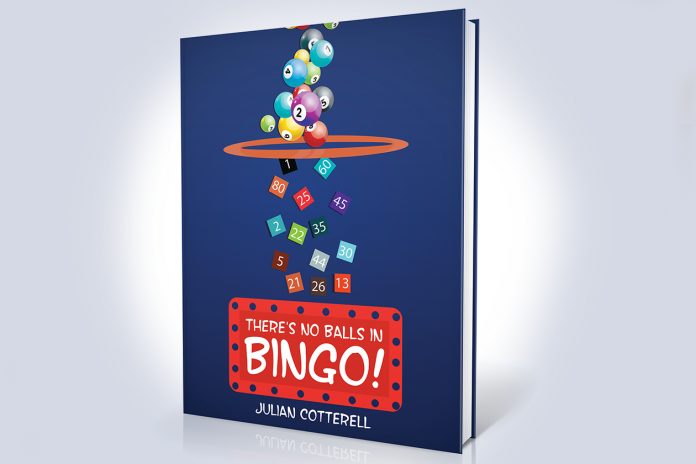 Having spent over forty years in the bingo industry there are many who will recognise the name Julian Cotterell and many more who will relate to, if not share, his love of bingo. They say that everyone has at least one good book in them and, based upon reviews, this is Julian’s.

Born in Chester, an acceptable length of time ago to be writing a memoir, the son of a Lieutenant Colonel, bingo was not initially the role Julian was drawn to. That was to have been a private detective. How do you jump from private detection to bingo? The answer is simpler than you might think and a not uncommon answer to many of the great quandaries in life we all face: mother.

Having discovered that her son was embarking on a career that might prove hazardous to his health, Betty suggested bingo. After all, it does offer excitement and generally speaking little risk to life and limb, unless you mess up on the main stage calling or miss a claim, in which case….

Setting out at the age of eighteen, on a career that would span over forty years, Julian had no idea how long it might last and where it would lead. All he did know is that very quickly after starting he grew to love the job and was immediately absorbed by the excitement of it all.

“I was always very keen, somewhat impetuous and soon found myself shooting up the managerial scale guided by dynamic chairmen and directors.” Julian commented. “There were many who guided me, including Jimmy and Simon Thomas, Paul Gregg, David Rogers and Sam Shrouder to name but a few. I owe so much to these ‘motivators’, both in regard to my career success and the enjoyment of it all.”

During those forty years Julian has worked for most of the major operators and a number of independents, in thirty-five different clubs and set up the first licensed bingo club in South Africa in October 1998. The idea for the book and its title had been at the back of his mind since the mid 1980s, when he promised himself that he should write a book about the career he has been passionate about. Following retirement Julian and wife Erica moved to Spain, where his mother had been living since 1972. “Erica and I thought about it. No work commitments in UK and too many rainy days, so off we went to the sunshine and to help my mum who was at the time 90.” Julian comments.

In January 2020 Julian decided to test the waters and sent thirty pages to two publishers, with a tongue in cheek covering letter, not sure if they would think it worth of publishing. Austin Macauley Publishers, based in London’s Canary Wharf, wrote back and said they loved it; ‘please send the full manuscript’.

Julian and Erica had just returned to Spain in March that year and motivated by the enthusiastic response from Austin Macauley, Julian set about his book. Using a microphone he dictated the text direct to his laptop and two months later the two hundred and seventy page manuscript went to the publishers, with daughter Charlene having created the cover image.

Published late last year the book is the engaging ‘story’ of Julian’s life in bingo and the bingo industry itself, full of anecdotes, with personal appearances of stars including Ken Dodd, Norman Wisdom, Jimmy Tarbuck and many familiar faces from Coronation Street.

Despite loving bingo, Julian was not (even in retirement) a regular player; his chosen games remain squash and tennis.

We have two signed copies of the book up for grabs.
Simply send your name and contact details (email address and/or mobile number) to: There’s No Balls In Bingo, Bingo Connect, Lexham House, 75 High Street North, Dunstable. LU6 1JF or email to: info@bingoconnect.co.uk

Closing date: 10th June 2022. Two winners will be selected at random aft er the closing date from all entries received by this date and notified directly no later than 20th June 2022.

‘There’s No Balls in Bingo by Julian Cotterell’ is available from: Publisher Austin Macauley www.austinmacauley.com, Amazon (in paperback and Kindle), Waterstones, hive.co.uk, and W H Smith and Blackwells (pre-order).

Bingo on the high street