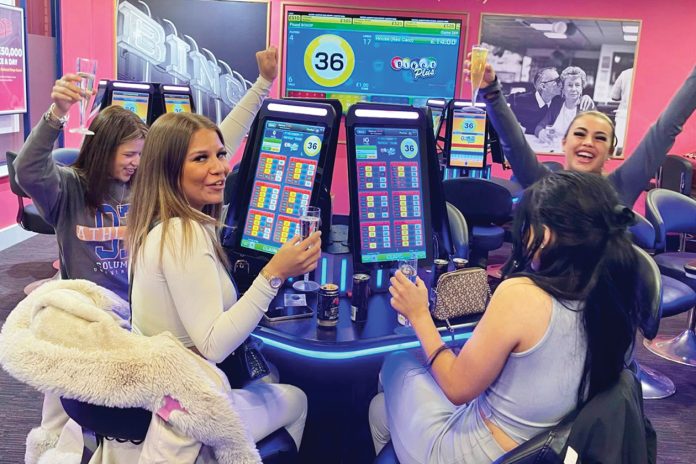 Simon Wykes, the former CEO/MD of Jackpotjoy, Gala and Mecca and former Buzz Operations Support Director Mike Smith are long time work colleagues, having worked alongside each other at Riva, Gala and Mecca, and are great friends. It is also a happy coincidence that for a variety of reasons they have typically always lived quite close to each other. It was when sat at Mike’s kitchen table that Wexel Gaming/Leisure Electronics’ Bingo Plus product came up in conversation and specifically Simon’s belief that nobody was realising its true potential.

Simon had been exploring the development and launch of a technology enabled community bingo concept for some time, but a mixture of organisational politics and financial backing had hampered progress. Both Mike and Simon knew the Wexel Gaming team very well and armed with a full set of bingo contacts and a wealth of industry experience, they decided to put their money, figuratively, where their mouths were. They both felt that bingo had been good to them and if they could help reinvent it for future generations to enjoy, then they would both be delighted.

There have been a number of High Street bingo concept over the years, some of which failed to find their audience, while others have forged ahead. Simon and Mike wanted to differentiate from what has gone before by building their bingo concept on a lean cost structure. This would minimise the risk and some of the pitfalls which they felt others venturing into high street bingo had fallen foul off. Equally, not losing site of purpose, regardless of size, the venue needed to be a place to play bingo: not a coffee shop for cake, with a side of bingo, or a bar, where bingo was an afterthought. They both felt that bingo should be at the very heart of the offer, clear and simple, which is exactly what ‘LOL Bingo’ is all about.

Experience has shown LOL Bingo’s founders that the number one driver of choice in bingo has always been convenience, yet the offer at many traditional bingo clubs has mostly been session based, offering little personal convenience. Where clubs have closed customers have been forced to travel further for their bingo, with the industry still hampered by the need for in-club liquidity. This restricts session times and forces customers to make a certain cash/time investment in order to play, which is not always convenient: an issue Wexel Gaming’s Bingo Plus seeks to address.

LOL Bingo is looking to invest in areas where there is a proven bingo demand, but where that demand is insufficient to meet the high cost structure of a traditional club. A low cost base, combined with the pay per play flexibility generated by Bingo Plus enables LOL to develop viable sites, building a profitable businesses.

The first LOL Bingo Lounge opened in Harpurhey Shopping Centre, North Manchester, in February this year. It’s an area Mike knows well from being the launch manager at the local Gala Bingo club, which closed in 2019.

It has been a gradual start as this launch venue finds its audience. Mike Smith comments,

“Our membership is growing at a steady rate as more people find out about us, but what’s most important to us is that virtually every customer has come in and had a laugh, a play and a win. That’s why we are converting so many of them into repeating customers.

“Our business model means we do not need to promote aggressively to sustain the business – we look after our customers and they return, repeat and recommend us.

“We also don’t compete with any traditional bingo offer as we provide bingo led community amusements with prizes, where the customer is empowered to choose how and when they spend their money and time. We don’t look to match traditional clubs prize boards – we just try and provide a convenient choice.

“Simon and myself are very much a team, as with most partnerships we don’t always agree but I personally think that’s a good thing. You keep sharp if you are constantly challenged on your thinking and we are both happy to change our opinion if the counter argument is compelling enough.

“Whilst we chat about everything, and always aim for consensus, we have agreed that there are certain areas where either one of us has the final say so that the desire for consensus doesn’t create inertia. That works when you have a partnership based on mutual respect.”

It is not just the bingo offer that LOL have shaken up, but also their staffing model. Tapping into the John Lewis approach, the team working at LOL Bingo are ‘partners’, right from day one and are invested in the business with a financial incentive, that remains in place during their employment.

For a completely new bingo concept the Harpurhey lounge has found its feet and audience relatively quickly and with the founders actively involved in the business they have been quick to tighten up the product offer and operational processes. “When you’re doing something new – you are learning all the time and refining everything” Mike said.

While LOL’s first venue builds it profile and customer base, the team are actively looking to expand and are eyeing up locations and markets in the Midlands and the North of England where there is no longer a local bingo offer. They hope to have bingo fans laughing out loud.

Hijingo! Believe in the bingo